3 Ways to Use Battle Ropes

Next time you want a cardio and strength workout all in one, head over to the functional training turf for a session with the battle ropes. If you've walked past the turf before, you've most likely seen these long, black ropes laying down waiting for their next victim. 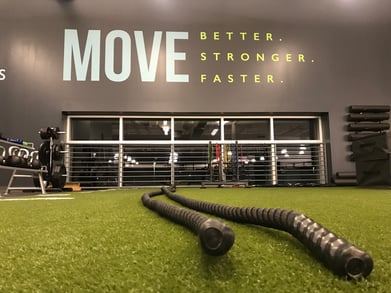 They may look innocent, but battle ropes are surprisingly difficult to swing, resulting in a quick but effective workout that will leave you huffing and puffing. In fact, studies have shown that just 10 minutes of swinging battle ropes counts as a vigorous workout.

For starters, they're heavier than they look. Depending on the thickness of the ropes, they can range from 28 to 53 pounds. This added resistance means that with every whip, slam, and swing, you're combining strength training with cardio training.

If you don't climb them or jump-rope with them, what do you do? After you've secured the ropes around a sled or hook, get to work with these 3 ways to use battle ropes.

This is one of the most common moves you'll see when it comes to the battle ropes. Standing in a slight squat with feet hip-width apart, take one end of the rope in each hand and alternate raising your right arm with the left arm. Move your arms up and down quickly to create a wave in the ropes. For an added workout, walk to the left and right.

With a similar set-up to the alternating wave, begin with one end of the rope in each hand. Instead of alternating arms, raise both of your arms overhead and slam the ropes down as you lower into a squat. Stand back up and repeat.

3. Snakes on the Ground

As the name sounds, the goal of this move is to make the ropes look like a slithering snake on the ground (and get a killer workout). Starting with the ropes in each hand, pull both of your arms out wide and back in towards your chest. Another way to perform snakes with the battle ropes is to move both arms to the left then the right. Get creative!

These are great basic moves to start with, but there are many more variations you can do to get a great workout with the ropes. Next time you find yourself on the turf, ask an O2 Personal Trainer for their favorite way to use battle ropes!