“Starting was the hardest part.”

They say that half the battle is showing up. Alan decided last February that he needed to start making healthier choices with his food and his fitness habits. Last February, he joined O2 and began working out 3-4 times per week. Fast forward to February 2018 – Alan has lost 101 pounds and feels better than he ever thought he would. 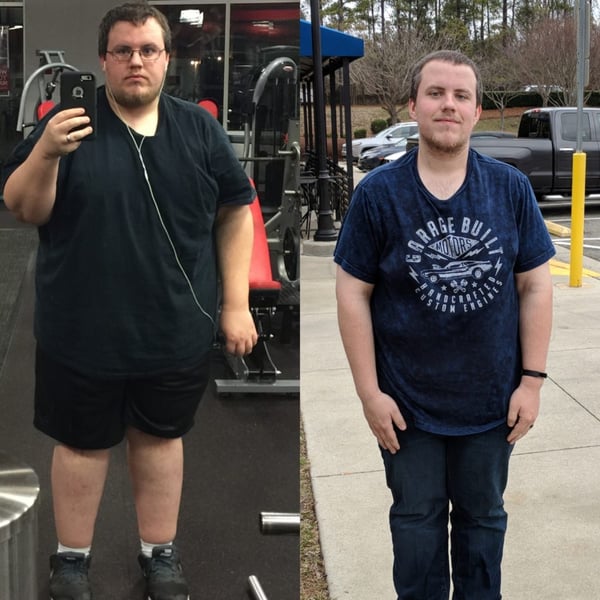 What was your ‘rock bottom’ or your ‘aha’ moment that made you decide to make a change?

I came to a point where I absolutely hated how I felt and looked. I couldn’t run the stairs without being out of breath, I had to ask for a seat belt extender on airplanes and worry about sitting on things due to weight limits, I hated every picture that was taken of me, and I felt tired all the time. There were so many little things along with those that affected my whole quality of life to where I finally realized that I needed to truly do something about it.

How did you begin to make the change? What worked for you?

I had slowly made dietary changes for about a year prior - going for low fat/sodium foods, whole-grain breads, and limiting soda, but I had not put in the full effort as far as diet and activity although I knew that I needed to. I learned over the months that the small changes and occasional activity weren't enough to produce positive results. I had a friend that wanted to start a plan last year and asked me if I would join them and that we could motivate each other through it. I said yes and we joined O2 at the same time and began our fitness journeys. At that point, I finally got up and put every bit of effort I had into making the lifestyle changes. I changed my overall diet and started going to the gym 3-4 times a week. For me, they went hand-in-hand. I hated the thought of putting in an hour at the gym and finishing that with a 1,500-calorie meal that would easily cancel everything that I did. Having someone to go with, knowing that we would hold each other accountable, and knowing that we were on the same track was helpful. Starting was the hardest part, but even with my friend, I learned that no one could change my health or appearance but me. My friend stopped everything about two months in, but I had already experienced enough positive results that I was not willing to let it go. It drove my determination to keep going, and I continued on my own.

What was the most significant or surprising change you felt?

In a little over a month after the lifestyle change, I had already lost 30 pounds and felt a drastic difference. My pants were loose, my shirts were already getting baggy, and I was able to complete more in the gym than when I started. Weights increased and I could increase intensity on the cardio machines. I was feeling less tired and more motivated even in my everyday tasks. I was also surprised that I was not craving any sugary or "junk" food. I've noticed more definition and muscles forming all over. 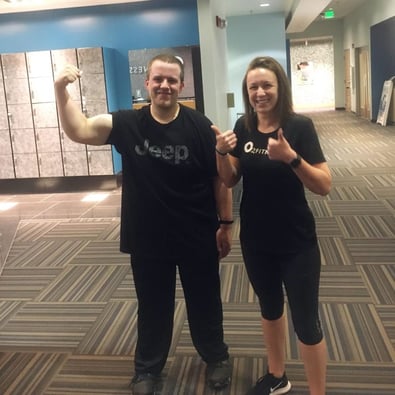 What is your maintenance plan?

Diet – Mostly chicken, fish, eggs, fruits & vegetables. As fresh as possible and protein-rich to curb appetite. Other than high sugar or heavily processed/packaged foods, I did not completely cut all foods, mostly watch portions and how often I have it. No specific diet plan used. Liquids – always keep water with me and drink throughout the day. Activity – Gym 3-4 times a week for at least 30 minutes, up to an hour depending on time. Work with trainer two days a week, complete cardio on non-trainer days. Stay active whenever possible – walk or run around neighborhood or park, walk on lunch hour, park further away to walk more, go bowling. Complete small exercises at home (planks, burpees, lunges, push ups).

What was O2’s role in your transformation journey?

I had tried other gyms previously and had not felt comfortable at any of them. Also, I knew that cardio was going to be best for the initial weight loss and quite a few had a limited selection. I felt comfortable joining O2. The atmosphere was better, it was comforting to know that staff was around if I had any questions, and I liked the overall layout and equipment selections. The clientele was very diverse which made me feel more comfortable. It became easier to enact this lifestyle because I was going somewhere that I enjoyed. I started with a fitness trainer in May (about three months after I started my plan) and have been working with her ever since. A subsidy even came through my employer a couple months ago to join another gym and I've stayed with O2. I have been consistently going for 3-4 days a week.

What have you learned through the process?

That it's all worth it and that I could feel better than I ever thought I would. Before I started, I dreaded the thought of going to the gym and putting in the work and dreaded changing my diet and giving up the foods I love. Surprisingly, I have not missed anything that I gave up and the gym became a routine once I started. There are plenty of healthy options available that have good taste. I also learned that portions do matter and having water throughout the day and small snacks really does help to curb your appetite. Most importantly, the work at the gym becomes useless if you eat a lot of bad food.

What would you tell someone who wants to make a change? How would you inspire them to finally go for it?

Go for it! There's no better time than now to put a plan in action. You have to do it because you want to and for you, no other reason. It cannot just be a diet or do it until you're fit and stop; it needs to be a lifestyle change, otherwise you will fall back into your current state. It is a lot of work and a commitment, but it is truly worth it. It will feel like a night and day difference and improve your quality of life more than you think. You CAN do it, and there are people who will work with you and cheer you on if they know what you're trying to do.