At O2 Fitness, our personal trainers not only help their clients reach their goals, but they help each other as well. Earlier this year, two of our very own personal trainers from O2 Fitness Seaboard Station competed in the 2019 National Physique Committee (NPC) North Carolina State Championships in downtown Raleigh. Not only did they compete, but they both went home with new titles!

Teagan Callaway won Overall Classic Physique Champion and first-time competitor Kayle Hemingson placed 2nd in True Novice Figure, 3rd in Junior Figure and 4th in Open Figure. These two incredible Seaboard team members were happy to help each other during the competition prep and have inspired others at O2 Seaboard to want to compete as well. 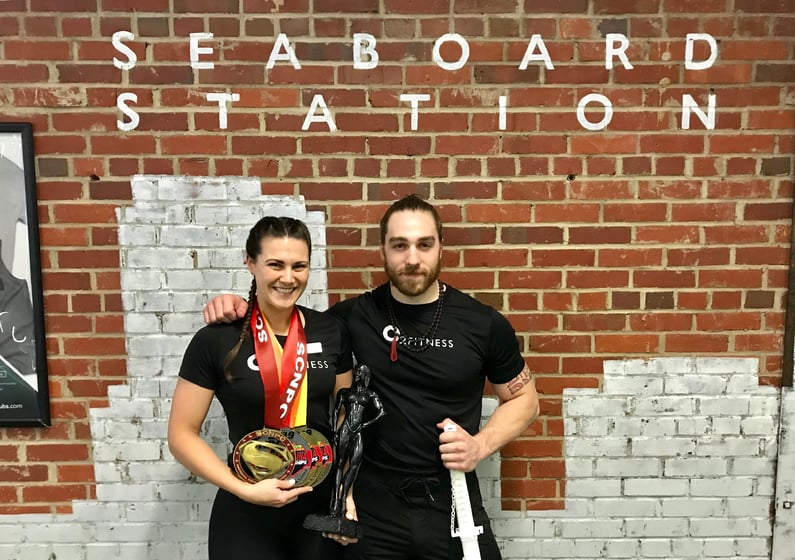 Teagan didn’t always want to be a personal trainer, but he knew he wanted to help people in some way. During high school and college, he was battling a back injury that left him in the worst shape of his life. “I was interested in pursuing medical school or a master’s in microbiology. I decided to fix myself first because I didn’t want to be one of those people who looked back like, 'I remember when I used to be fit.'" Soon he decided to forego his medical career to get certified as a personal trainer right out of college. He still gets the benefit of helping people and impacting lives but in a different way. 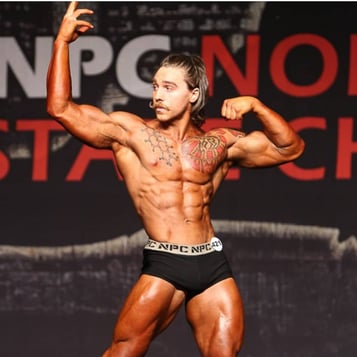 Teagan's initial interest in bodybuilding began back in high school when he saw the documentary Pumping Iron starring Arnold Schwarzenegger. Being an avid weightlifter for years, Teagan credits this film for his consideration to start competing himself. “Being a personal trainer, fitness is my life, so I thought I might as well go and show people what I can do. I just wanted to do it and have fun," he said.

Before his very first show, Teagan had never been on a diet, much less a strict pre-competition diet. "For that first show, I prepped for 17 weeks and 4 days. Over time the more I've competed, the more I learned that I don’t need a 17-week prep." Teagan said. "For some people, they could walk on stage in a week or two if they’re already at a lean body fat percentage. But if you’re at 20 percent body fat percentage, it would probably take 20 weeks to prep.”

The three male categories for an NPC competition are Physique, Classic Physique, and Body Building, and each is judged differently. Of the three, Teagan prefers Classic Physique where you're judged on symmetry, proportion, and overall size.

“The way to look at proportion size is that the guy with the massive shoulders won’t win. If something really stands out, that tells you they’re disproportionate," he said. "They’re looking for everything to match so you don’t want one area to dominate your physique and you don’t want anything to look to strong or too weak.”

What it mostly comes down to is posing, where Teagan says you can win or lose a competition. In his first competition, he chose not to use a posing coach and instead studied 1970s bodybuilding books.

Since that initial competition, Teagan has done three more shows, competing in every category in addition to Classic Physique. This year, he was excited to dive back in and take on NC State Championships with the support of his fellow trainers and members at O2 Fitness. "I’ve done multiple competitions now so I know the sport. I wanted to step on stage with my buddies and go through the experience with them and see if I could help any way I could.” 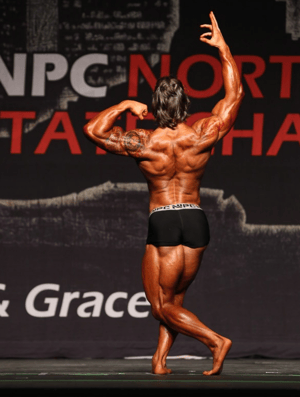 Teagan coached himself through all of his competitions. “I’ve been self-taught. I just kind of have fun with it. I'm a scientist at heart so I like to do it as an experiment and change one factor throughout.” For this year's State Championships, Teagan experimented with his diet using carb cycling. This technique involves gradually cutting out your carb intake one month before the show, reaching a point where your body is starving for carbs. In that state, once carbs are reintroduced, they go straight to your muscles, giving them a pre-show pump.

As far as his workouts, Teagan's NPC prep was not much different than what he does on a normal basis. He begins with 45 minutes of joint health, stretching, yoga, rehab, 45 minutes of challenging weight training, and balance with 45 minutes of handstand training. This is the format of how he has always worked out, but he changes up his training styles often. “I like powerlifting, handstands and yoga just as much as I like bodybuilding," he said. "The biggest thing about signing up for a show is you then have a date and a goal. It helps out with progress and makes you to set an intention. When I’m prepping, my intention is, 'Oh yeah, I’m going to be in my boxers in front of 500 people.'”

Although he did not work with a coach for this year's competition, fellow Seaboard Station personal trainer Rainey Ashcraft helped him along the way with workout advice and posing techniques. “Shout out to Rainey. I didn't have a coach, but he helped out a lot," Teagan said. "Everybody at Seaboard did. It was the best gym I’ve competed with.”

Rainey helped Teagan focus on proportion, one of the categories he would be judged on. “With Teagan having competed before he had feedback from competitions in the past. He needed to create more balance with his physique, which is the whole goal behind bodybuilding," Rainey said. "His biggest imbalance was with his shoulder strength and size, so we focused on shoulders to balance out his look. Wider up top with more roundness on his rear delts. We focused on that for an 8-week period leading up to the show.”

Overall, the most difficult thing about this year's prep for Teagan was to not take it too seriously and just compete for the love of the sport. “The working out wasn’t hard because I enjoy working out. That’s the easy part. The hardest thing for me is to accept that I have done the best I could and even if I wasn’t perfect with the diet, if I had lazy days, to just accept that I did my best," he said. "I tried to not care about winning, to just go and have fun. That’s what it should be about at the end of the day, it’s a sport for fun with friends and memories to look back on."

Kayle has had an interest in competing in a bodybuilding show since first training with Rainey in 2016. “I wanted to do one then, but it wasn't the right time and my finances weren’t there, so I kept putting it off," she said. "I got married last June and once I came back from the honeymoon I thought, now I have the time and finances so I’m just gonna do it!" she said. "I am so glad I waited because Rainey gave me a really good foundation for my muscles and I just kept growing from 2016. Rainey pushed me hard with weights in order to get my muscles where they needed to be for these competitions.” 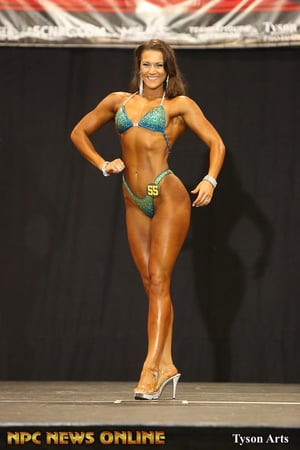 Her initial sessions with Rainey paved the way for her to begin a serious competition prep.  "I have always been told that If you want to gain strength, striation, and curve you need to go heavy and go strong!" Rainey said. "We did a 12-week period of intense strength training and this is where she really built the foundation. When it came to her prep for the show, once she began carb cycling and losing water weight, all that striation and muscle development that we built during foundation period popped out in the show."

Kayle began a pre-prep from August to October where she started a lean bulk in order to recover her metabolism. The purpose of a lean bulk is to get your body to the point where it is burning the calories you are eating with your workouts. This allows your body to process food the way it needs to in order to promote muscle growth. A lean bulk promotes muscle growth while simultaneously decreasing body fat.

Her competition prep began in December and continued for about four and a half months, decreasing carbs each week. As the show got closer, Kayle started doing “depletion weeks” which is where you eat little to no carbs then slowly start adding carbs back in. Depletion weeks restart your metabolism and cause you to drop body fat.

What exactly does it take to compete in a bodybuilding competition? “A lot of discipline," Kayle said. "I look up to Teagan who is self-taught. I am really glad that I had someone to send pictures to and someone to send what I ate week because it holds you accountable. It makes you stick to your diet, so you don’t get in trouble with your coach.”

The hardest part of NPC prep for Kayle was the diet. “Working out was easy because I was always here at the gym," she said "When you’re home by yourself, you want to eat because you’re bored so that was hard.”

Kayle competed in 3 different classes: Figure True Novice, Figure Junior and Figure Open. All classes have about 4 to 5 people of a similar height. With Figure, the judges are looking at your size, shape, posing and whether you are proportional. “If you mess up with your posing, they may think you aren’t fully prepared," Kayle said. "In Bikini competitions you are always facing on your good side but with figure you do a front facing pose and back facing pose, so they look at proportions.” 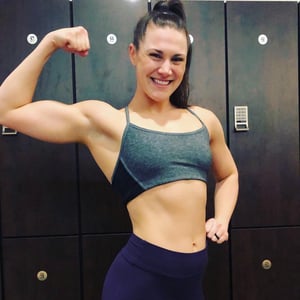 For anyone interested in getting into bodybuilding, Kayle's advice is to make sure you are doing it for the right reasons. “This sport isn’t for everyone. Three years ago, I wanted to do bikini because I wanted to be able to see all of my muscles, but I was doing it for the wrong reasons back then, and it was more to look good," she said. "Now, I’m glad I waited. I see how much you can transform your body into whatever you want it to be, and because Rainey gave me an 'I am strong, I can lift this mentality.'"

Despite her stage fright, Kayle was determined to compete to push herself out of her comfort zone. Now, she has plans to compete in another show next year alongside Rainey. "After it’s over, you want to do it again and work even harder the next time to get better and improve yourself," she said.

After training several clients who have competed, Rainey is ready to take the stage himself next April in Raleigh to experience just what his clients go through. “I am really excited. Working with Kayle and Teagan and the other trainers who have competed in bodybuilding competitions has really inspired me and motivated me to want to compete myself," he said. "I especially think it would be important to have the life experience so that I can relate more to the people that I’m working who are training for shows.”

Are you interested in taking on a bodybuilding competition yourself? Teagan says to go for it. “Just sign up. Experience it and learn it," he said. "Maybe you don’t win, maybe you don’t do as well as you want. Even if you don’t have the perfect diet or the perfect workout routine, you should just do it.”

Interested in taking on a bodybuilding competition? Our personal trainers can help! 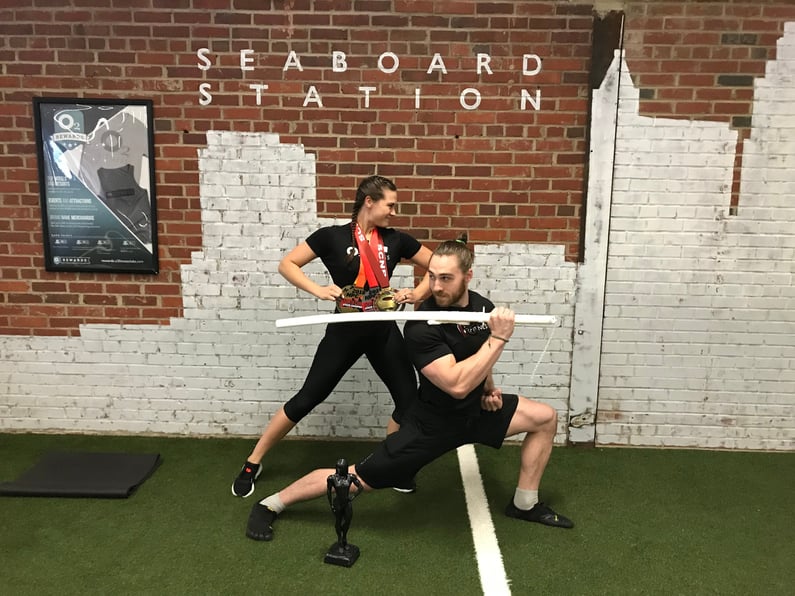